Quail Ridge Arabians is in Gilroy, California. Lou and Vicki Doyle started a breeding program more than 25 years ago with the purchase of the mare Kouream De Ment. She was in foal to Magic Dream CAHR and three months later (May 16, 1996) presented them with their first foal, a gorgeous bay colt that they named QR Excel. QR Excel went on to become the 1999 Italian National Champion and the 2000 US and Canadian Reserve National Champion Stallion.

Since May 1999, QR Excel has been owned by the Excel Partnership. In 2002, he was exported to Italy.

According to the AHA registry, QR Excel has sired 51 purebred Arabian horses, including Caravagio’s 2002 dam, My Sweet Lourdes. 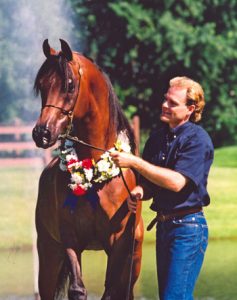